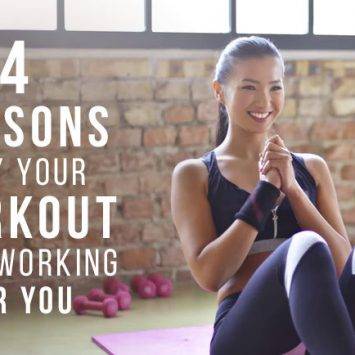 There’s no escaping it: working out is hard work. But what happens when your time exercising just doesn’t deliver the kind of results that you feel like you should be getting?

We were curious to find out just what makes a workout work, so we commissioned a survey of 2,000 Brits to reveal what makes an exercise plan go the distance.

The survey delivered some really useful but surprising results, and we noticed that there were four common reasons as to why people were throwing in the towel and giving up on their workout regimes.

You’re not in it for the endorphins

The survey revealed that the mood-boosting properties of exercise was the primary motivating factor above all else for most people we surveyed.

We discovered that those people who exercised solely to improve their mood or to de-stress stuck with their plan the longest.

It’s a well known fact that exercise is a fantastic mood lifter. The brain floods the body with with dopamine (a feel-good chemical) triggering a positive and energised feeling in the body.

Whether you’re feeling stressed, anxious or just a little bit down in the dumps, try doing a small amount of gentle exercise to feel the full effect of your brain releasing dopamine. A quick walk around the block or even doing some household chores will do it!

Not only will you feel more energised, you’ll feel calmer and more confident as a result.

You’re only thinking about your short-term health and fitness

We discovered that one in four people in the UK want to make a permanent lifestyle change in 2018 - which is great news as we also discovered that those who think about their health and fitness for the long-term were more likely to achieve their exercise goals.

Having a long-term goal in place can help to motivate you to exercise, but as we’ve discovered it’s very easy to lose interest after a month or so. Keep your eye on the prize and don’t forget where you want to be a year from now, even if it feels difficult in the present.

Don’t beat yourself up if you miss a gym session or an exercise class, this can be really demotivating. Focus on your long-term action plan and promise yourself you’ll make it to the next one.

Your only goal is to ‘drop a dress size’

Exercising simply to try and stay slim proved itself to be one of the most commonly cited reasons for giving up on an exercise plan. Those who exercised for this reason alone lasted on average around five weeks, giving up far before those who said they were motivated by anything else.

Rather than focusing on fitting into a certain dress size, why not take some key measurements of your body before you begin your exercise regime. While the changes you’re making might not yet be reflected by your dress size, you’ll most certainly see the difference if you compare your measurements after a few weeks, and this will motivate you to carry on.

Our survey suggests that 70 per cent of Brits who set exercise goals usually reach them after around six-and-a-half weeks.

While focusing on a single goal is a fantastic motivator, it’s worth having two or three concurrent goals to aim towards.

Whether it’s increasing the amount of weight you can lift, or simply improving endurance, setting sensible goals is a must when it comes to successfully sticking with an exercise plan long term.

We know that regular workouts strengthen the body and increase flexibility but what happens when you’re lacking a bit of spring in your step? Wellman Energy and Wellwoman Energycontain an advanced energy release formula which is designed to support your daily performance levels and give you an extra nutritional boost before, during and after exercise.