Do you worry about what your teens are eating, doing and who they are friends with?

Parents begin to lose control of their children at the age of 13, according to a Vitabiotics study.

After years of watching their every step, mums and dads are left wondering what their offspring are eating, doing and who they are friends with after they start secondary school and begin to make their own way in the world.

Four in ten worry about the food and drink their child is tucking into when they aren’t with them, with 43 per cent often finding illicit sweet or fast food wrappers in their child’s bedroom or school bag.

And 39 per cent don’t always know who their child is hanging around with or the company they are keeping – which makes losing control of their diet even more likely.

Almost one in ten even believe the point at which they have to start to let go begins as early as ten years old.

Losing their grip: what parents worry about with their teens 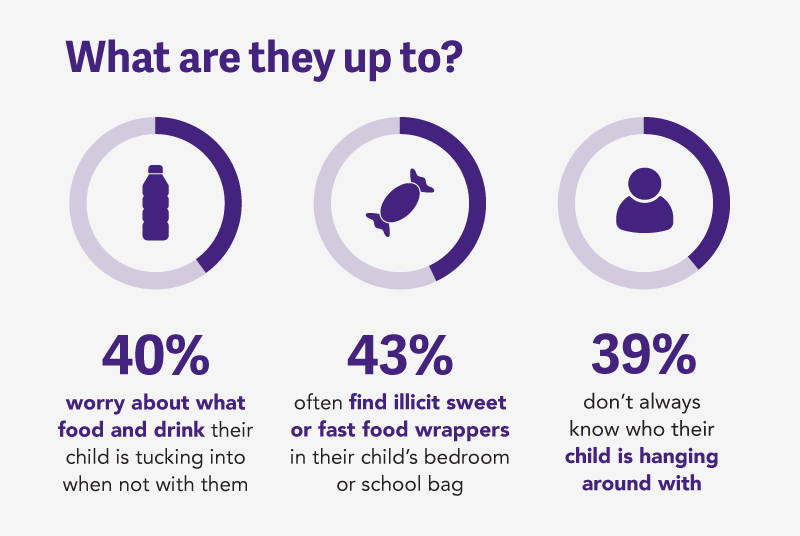 Losing their grip: what parents worry about with their teens

And more than half of parents argue with their teens about their diet, with the need to eat more fruit and vegetables top of the list.

With a bigger range of snacks to choose from, it is no surprise many parents think their offspring are indulging in more junk food than they did at the same age.

Even when they start school and nursery, you still get a good idea of what they are doing from teachers and notes sent home.

As a result, parents are left trying to guess what they have had to eat and whether or not they are getting everything they need.

The study of 2,000 parents of teenagers aged 13-18 found six in ten feel like they’ve lost control of their children as they’ve become more independent.

But this means 63 per cent of parents worry about their children getting all of the vitamins they need for a healthy diet.

The research, carried out via OnePoll.com, found 12 per cent of parents admitted to having no idea how many chocolate bars their kids are eating while another one in ten struggle to keep tabs on the number of packets of crisps they tuck into.

The same number couldn’t say how many glasses of fizzy drink are consumed while more than one in 20 have no idea if their children are eating the fruit and veg they should be.

It also emerged that just over four in ten parents think their child has tried an alcoholic drink – when in reality 44 per cent of teenagers claim to have already had their first taste of booze.

And almost one in five teens have smoked a cigarette, something just 16 per cent of parents think is the case. 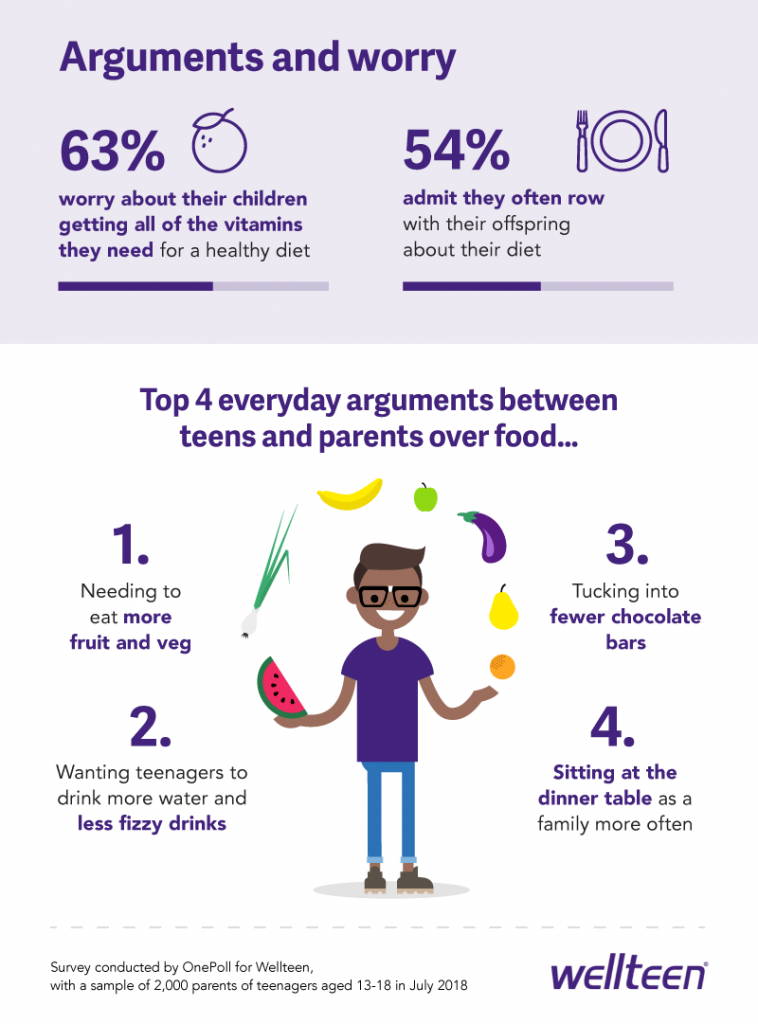 Needing to eat more fruit and veg is the most common row, followed by wanting teenagers to drink more water and consume fewer fizzy drinks.

Tucking into fewer chocolate bars and sitting at the dinner table as a family more often are also among the everyday arguments parents have with their children about food and drink.

In fact, teens are among those with the worst diets of any group, according to government figures.

That might be because they are rebelling from their parents and testing out their newfound independence, alongside the pressures of a hectic schedule of studies, sport and socialising.

Good nutrition is vital for growing brains and bodies. While a healthy diet is the absolute priority and basis for health, Wellteen supplements for teenagers can safeguard nutritional intake at a time of life when unfortunately it might not always be a priority in teenage lives.

The content of this blog is not intended to be a substitute for professional medical advice, diagnosis, or treatment. Always seek the advice of your physician or other qualified health professional regarding any medical condition. While every care is taken to ensure the accuracy of the information presented in the blog and to describe best generally accepted current practices we cannot accept any liability for errors or omissions or for any consequences from application of the information given.