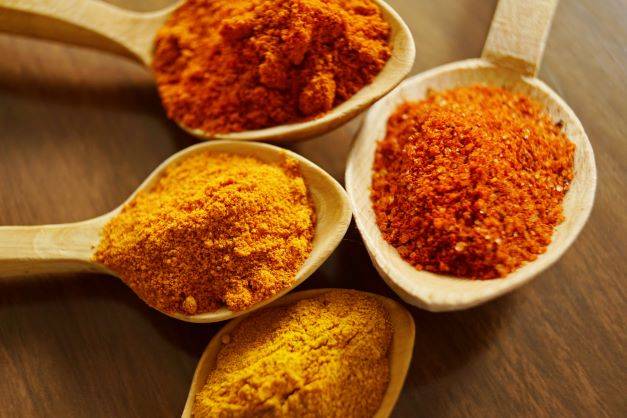 Our Round Up Of What Turmeric Is, The Benefits And Sources

Turmeric has been used for centuries, not just for flavour in food, but also because of the health benefits it possesses.

Although you may know it as the bright yellow spice, a key component in curry powder, there is a lot more to this golden spice…

Turmeric goes back a long way and has a long history of use. It contains several natural compounds called Curcuminoids. One of these Curcuminoids is Curcumin and it is this active ingredient that is said to provide a number of health benefits. Curcumin also gives turmeric it’s vivid yellow colouring and makes up about 3 percent of the weight of the turmeric root.

The Benefits Of Turmeric

Although there is still a lot of research to be done on turmeric, and the benefits it can provide, studies have suggested that turmeric, and more specifically curcumin, can play several important roles.

Primarily, turmeric helps support normal, healthy digestion. When turmeric is taken with Piperine, the active ingredient found in black pepper , the Curcumin in turmeric is more bioavailable; up to 2,000% more in fact.*

The Best Sources Of Turmeric

You might be familiar with turmeric being used as a spice in foods, perhaps in a curry or to give rice a distinct yellow colour. It is also used in sweet foods such as in cakes, baked goods, juices and smoothies to name just a few.

Another way to take turmeric in controlled, effective amounts is via supplementation.

Ultra Turmeric is a one-a-day supplement, from the UK’s number 1 vitamin company. It contains the equivalent of over 13 grams of pure turmeric in every tablet. This means that each tablet contains 210mg of Curcuminoids, including Curcumin the key active ingredient in turmeric.

As well as turmeric, Ultra Turmeric also contains 10µg of vitamin D3, plus Black Pepper extract from the Malabar coast in South India. As mentioned, the Piperine in Black Pepper is thought to possibly increase the bioavailability of the curcumin in Turmeric.

Vitamin D contributes to normal immune system function as well as the maintenance of normal bones and teeth, normal muscle function and normal blood calcium levels. The amount of vitamin D in Ultra Turmeric is the exact daily amount recommended by the UK Department of Health, who advise that everyone should consider taking a supplement containing 10 µg of vitamin D, especially during the autumn and winter months.

Although it does vary among different people, you can expect to see benefits build up from taking Ultra Turmeric, over several weeks. There is no maximum length of time over which Ultra Turmeric may be used.

Turmeric is also found in some of our Jointace products , including Jointace Original and Jointace Max, the ultimate product in the Jointace range, ideal for those with an active life, in sport or in later life, to aid with cartilage and bone health. Jointace Max provides vitamin C which contributes to normal collagen formation for the normal function of bones and cartilage. It also contains turmeric, as well as collagen, Glucosamine, Chondroitin, and super-strength omega-3 in one triple pack.