Pregnant for the second time – with twins! 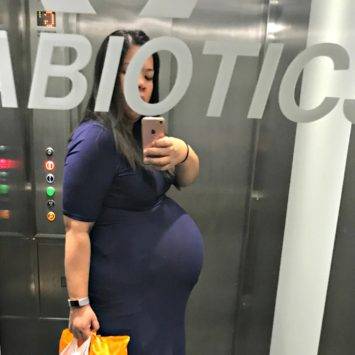 Our blogger Jenny is back, with some exciting news...

We're thrilled to have Jenny back. You may remember that she wrote about her first pregnancy - including the things that surprised her - as well as new motherhood, along with her five essential baby items, weaning journey and tips for taking a baby on holiday.

Well now she's back, with some exciting news...here's Jenny:

Way back in February I took a pregnancy test and was thrilled to find out we were having a little brother or sister for Carter, who at the time was 15 months.

Admittedly, I did have horrendous morning sickness (all day sickness to be exact) and I swear by 6 weeks I was ready to get my maternity leggings out but hubby and I were still super surprised when we were told we were expecting twins at our 12 week scan!

There we were, waiting in suspense while the sonographer did her stuff thinking the worst…why is it taking so long? Perhaps there is nothing in there and I am just gaining weight for some other reason. Then the words I remember so clearly, ‘Do you have twins in your family?’

My face broke into the biggest smile and as I glanced at my husband I was pleased to see he had the same reaction. Sure enough, soon as the sonographer turned the screen we could see not one but two little babies.

I think we were in disbelief as twins didn’t run in either of families but we felt so lucky to be blessed with twins, as hard as the journey may be.

We both remember full well how hard it is with one new born and 30 weeks in we still haven’t quite figured out how we will manage two tiny babies and a toddler but if anything we realise these early years do literally fly by (although to me the first three months with a new born seemed to last an eternity) so hopefully we can put what we have learnt with Carter to good use.

In some ways twin pregnancy is definitely harder than carrying a single baby, for example in the early days I remember suffering from extreme hunger. The kind of hunger where your belly aches for food instantly. I found myself having to eat breakfast in the car on the way to work as well as eating breakfast at my desk. My bump also made an appearance much sooner than in my first pregnancy. At first I put this down to the fact that it is my second pregnancy but by 12 weeks I was actually finding it hard to hide the bump because it was so big. My husband did joke that perhaps its twins but I brushed that aside.

Oh and don’t even get me started on the sickness. I literally was retching 24/7 and went from suffering extreme hunger to not being to face any type of food. For me it was definitely a case of ‘double the hormones, double the sickness’. I’m just glad it subsided by about 16 weeks and my appetite has come back. On the flipside I don’t feel as tired or had any of that horrible itchy skin this time around. Although as I enter the third trimester I do feel I tire easier now than in the first two.

I hadn’t realised that twin pregnancies are automatically high risk but I was happy to hear that each twin has its own sac and own placenta which is the ‘safest’ form of twin pregnancy. It also meant the twins are more than likely non identical. However, at a hospital twin workshop I was told as they are the same sex (two more boys!!) there could be a chance they are identical if the egg split very early on hence their own sacs and placentas. I cannot wait to meet them and find out if they are truly non identical or identical. Not long to go now...

Make sure you catch up with our posts from pregnancy month, including myths around eating for two and Fran's twin birth story