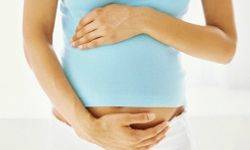 Blogger Rachel from Make A Long Story Short was surprised when a routine hospital visit turned into something much bigger. Here, she tells us her birth story and what it's like to be induced...

It was an ordinary day. Until, suddenly, it wasn’t.

I had big plans for Thursday. The house was a mess. My hospital bag needed a few items before it was finished. I was going to make a white chocolate torte in the afternoon, because some days are white chocolate torte days, and that felt like one of them. I just had another antenatal appointment at the Royal Berks to get through first.

We weren’t friends these days, the Royal Berks and me. I had a snarky blog post all written about how their obsession with collecting my bodily fluids was getting in the way of our relationship. ‘You have some of the early signs of pre-eclampsia’, they kept saying, after I’d spent another three hours being poked with needles and hooked up to baby monitors, ‘but we’re not concerned. Yet. Come in next week. And bring in another milk bottle of urine, because we love those.’ I sped to the hospital at an unearthly hour in the morning, cursed my way through several roadwork diversions, went the wrong way round the one-way system in the car park and had a squashy-faced old man glare at me like I’d emptied my special milk bottle over his head, then misjudged the distance in the parking space and ran into the wall, and was beginning to feel like one white chocolate torte wouldn’t be enough.

‘You’re back!’ said the blood-taking lady I’d met earlier in the week. ‘Do they want another sample already?’

‘Apparently’, I smiled, pushing my special milk bottle under the chair with my foot, since I don’t like to show large quantities of my waste to strangers.

‘Well. Thirty-eight weeks, right? You’ll be ready to have it soon, whatever happens’, she said.

‘Oh, I hope so’, I groaned. Dramatic Irony Fairy looked up from the corner and coughed, hammily, but I was too busy gathering up my keg of wee to notice.

An hour later, a doctor was telling me that they’d finally collected enough of my fluids to conclude that I needed to have this baby today.

In a panic, I called Timothy. ‘Today. TODAY. Tim, my hospital bag isn’t finished. We don’t have the crib set up. And I didn’t do any of the housework!’

Not even unexpected babies faze the Unflappable King of Crises. He leapt on his bike (insert superhero music here), cycled seven miles in a torrential thunderstorm, paused to wring out his t-shirt in the train toilet, and landed dripping on the hospital carpet before you could say ‘awkward personal place examination’, which, coincidentally, was what was happening to me upstairs.

Once I’d written a list of things we needed, he’d gone home to get them, and I’d eaten a really big bag of prawn cocktail crisps, the shock had worn off a bit. Tim promised that if there wasn’t time for him to do the housework by the time we were sent home, we could gently swaddle the baby in the mountain of clean laundry at the foot of our bed, thus solving the crib problem at the same time.

By 6.30 that evening, my uterus was ready to rock.

Inducing a baby that isn’t ready to come out on its own is a tricky business. Sometimes the hormone drip doesn’t work at all. Sometimes it takes hours and hours. And sometimes it works far too well, and your contractions are so strong you need extra pain relief you hadn’t planned for. But I’d barely been on the drip for fifteen minutes when the contractions started, all by themselves. For the first hour or so I hung onto Timothy’s neck and breathed with the smell of his collar in my nose. Then they got worse, and I forgot about everything except the gas-and-air nozzle in my teeth and the grip of his hand and the need to breathe, and move, and breathe, and move until it was over. The midwives changed shift, and the second one was blonde and jolly and wonderful. She put her hand on my back and told me I was doing brilliantly.

It changed soon after that: the pain stayed hot and pulsing in my back, but I felt like there was a large stone in my nether regions that needed to be evacuated, pronto. I realised that this was the ‘urge to push’ everyone kept going on about, and the stone was the baby’s head, and that meant my body knew exactly what it was doing, and it was almost over. The last part was optimistic. I pushed for an hour and a half. And I think I sobbed, and I definitely said I didn’t want to do it anymore, and Tim has the bruises to prove how hard I squeezed his hand. A doctor came in and said that it was taking too long, and they had me on my back with my legs in stirrups and were about to use that big sucky thing that looks more like it was meant for plunging a toilet, and I knew I didn’t want any of that action, so pushed one last push with every muscle in my body. 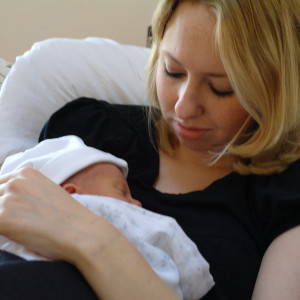 And out he came. I can’t say I looked at him and felt an overwhelming rush of love and belonging, like they talk about in all the baby books. What I felt was relief, and bewilderment, and a strong sense of unreality. I knew he was mine, but it felt like he’d been lent to us for a morning, and we’d be checking him back in before we went home.

A few hours later, I’d been moved to the ward upstairs, Timothy had gone home to sleep and sort out that pile of swaddling laundry, and it was just me and the little person we’d just decided to call Henry. He blinked out of his crib at me, and I remembered that I could pick him up any old time I wanted. So I did. He looked at me, and I held his head in my hands and realised I’d already memorised every inch of his face. I told him that I was his mother. I told him what a wonderful boy he was going to be, and how much we loved him, and that we were so excited he was here. And I knew, with a heart-deep sting of truthfulness, that I meant every word.

Read more: Why a home birth was best for Fi Star-Stone and Can hypbobirthing give you a pain-free labour?