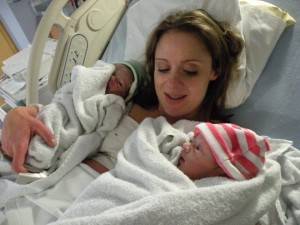 Kicking off the February theme of 'The first few months' is TalkMum blogger Fran, discussing what she wishes she'd known when she first became a parent, and how she coped with the arrival of her second babies. You can follow Fran's blog here.

Aside from wishing I’d magically know everything about caring for a newborn, there were quite a few things I wish I’d known before becoming a parent; the first being that the huge physical and emotional effort of birth followed by dipping hormone levels can do funny things to a person. I wasn’t prepared for getting a feeling of anticlimax after the initial euphoria. When back home from the hospital I didn’t think I felt as ecstatic as I should have done and I felt guilty. The feeling quickly passed and then I was one doting, happy mum. I just wish I’d known that the baby blues are perfectly normal and that there was no need to feel guilty.

Why did no one tell me that in the early days, leaving the house requires military planning and can take a serious number of hours? I’d packed the changing bag, had got us both dressed and fed, yet somehow in a whirl of exploding nappies, a number of outfit changes (because of aforementioned nappies) and another on demand feed several more hours had elapsed. I couldn’t see how this process would ever get easier and faster, but of course it did.

There will be those days where you try to cram in too much and it all goes a bit wrong: you go to a group in the morning, you agree to meet with other mums in the afternoon, the baby doesn’t sleep when you expected him to, you get an unexpected visitor, you need to do several loads of washing and the sink is full of dishes. Sometimes you just have to put it down to experience and think that tomorrow is another day.

As a first-time parent, I really wish I’d known not to hang on every word the Health Visitor said. I soon realised that Health Visitors were often not unified in their advice; and in quite a few cases were not talking from personal experience. This is not to say I didn’t get some great advice from them, it’s just I wish, in the beginning, I’d trusted my own instincts more.

Sofia (my first born) was two weeks overdue but still rather slight at 6lbs 6oz. She was always in the bottom part of the percentile chart. Weaning went well and she was (and still is) a very active child. When her weight plateaued I was called in to see the Health Visitor every week. Each time was the same: me knowing everything was well, but still getting that sense of dread about being told again that the weight gain wasn’t enough. After weeks of this routine the Health Visitor finally conceded that Sofia was probably just petite like me. I vowed never to get stressed again like that when I knew things were fine.

When I became a parent second time round, I was far more confident in my parenting skills but I wish I’d known that I would need to relax about trying to get my twins into a routine when I needed to meet the demands of a toddler as well. I couldn’t expect Sofia to modify her behaviour and her routine just because there were two new babies in the house. I found myself doing things like dragging two-week-old babies to a Sure Start group just so that Sofia didn’t feel everything had changed. It was worth the effort though as we avoided any jealousy.

So many things I wish I’d known. Although it seems to have all worked out so far…

What's the one thing you wish you'd known when you first became a parent?

A blogger and Hubber on some of her favourite subjects, which range from parenting, food and wine to Italy, investing and football; some of Fran’s writing can be viewed at: http://francescad.hubpages.com