Trust your instincts; top tips for baby and toddler sleep 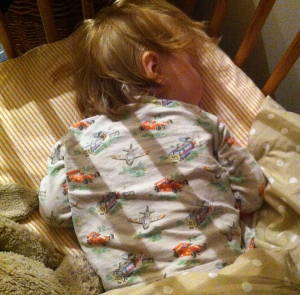 Continuing our Sleep Month theme, here's Rachel on everything she's learnt about baby sleep, and her tips for other parents:
If there's one thing that topped the tables in terms of competitive talk at parenting groups, it was sleep. Or, lack thereof. how long, how much, which baby was worst, who was getting the least sleep. some weeks I didn't want to admit Pip wasn't having any issues that week otherwise I wouldn't have been able to join in...
We were lucky; we've ended up with a toddler who mostly sleeps very well. In part, perhaps, due to good sleep genes, as both M and I are excellent at sleeping, both soundly and for long periods of time (or we were, until Pip came along, at any rate) and in part because some children just take to it ​quicker or more easily than others.
Not that we didn't have to work at it. We did. This is what I learnt:
- (after taking ​into account ​medical advice​/best practice​where appropriate)​ T​rust your instincts. ​We had Pip in a basket on a rocking stand for maybe 5 or 6 weeks, then in a cot by our bed, and then in a cot in her own room after 6 months. ​This is what felt right to us. Pip also spent a fair amount of time sleeping on my chest in the early days, with me dozing in a half sitting position. ​We never formally co-sleep but we do sometimes have her sleep in bed between us.
- ​W​e were from the beginning big believers in "the pause". ​We NEVER ran to her side the minute she peeped. we always waited, paused, assessed. ​Of course, if she was distressed, or hungry, especially as a small baby, we attended to her. ​But often, she was just re-settling. ​Being heavy sleepers helped with this too, of course, as she would have to be quite loud for us to wake.
- ​Nap times in her buggy from very small. I soon figured that pretty much the one constant thing would be her buggy, so, even in the house, she napped in the buggy. ​This meant that wherever we were, it was familiar. ​We got a black out snooze shade for it. ​We started going out from about one week old, and would put her to sleep and then have our meal, or chat with our friends in the pub. ​This has meant we have been able to be out and deal with her bedtime on the hoof, without always having to return home. ​She has also learnt to sleep without us soothing her to sleep, so one or both of us doesn't always have to be there.
- ​Temperature appropriate clothing ​- ​we used a combination of vests, sleepsuits and gro-bags to start with. ​W​e kept the room on the colder side. ​At around a year, we moved on to a duvet.
- ​Milk before sleeping I'm not even sure what the books recommend, but I always put Pip down with a full tummy. ​We started with morning and afternoon naps, and I would give a feed before both. Pip has been only having one nap since about a year-ish, after lunch, which she has after a bottle of milk. we also give her milk before bed.
- ​Flexible routine​ ​​- we have a routine, because I think that is helpful. ie. pyjamas, milk, reading, snuggling, singing and then bed, but it is flexible. ​Sometimes we bathe her, but not every time. ​This means it works wherever we are and we are not tied to the house.
- ​Acknowledge there will be set backs ​- ​at three months, just when we thought she had got it, she started waking up a lot. ​When she learnt to stand up, she would stand and shout from her cot, dragging herself back to her feet and screaming. ​We would go in and lay her back down again, and she would stand up again, repeat ad nauseum​, for up to an hour each night​. ​In growth spurts, she often wakes and requires a cuddle before going back down again. ​Recently, we've experienced night terrors. ​At each set back, we've tried to be patient, re-assuring but not forgetting our fundamental decisions. ​Also ​recently, she's started screaming and hanging like a koala at bedtime, so we've spent longer on the calming snuggling milk part of the routine, putting her in the cot only when she is ready to not scream.
- ​Trust that your baby will be ok. ​I​t's hard, but easier I think than sleep training. ​Patience.
- ​Use a monitor - we u​se an audio monitor​, even now (mostly due to the heavy sleeping) but it's worth noting that​​I've never met anyone who has recommended their video monitor in the long term.

Rachel blogs at www.thelittlepip.com about surviving motherhood and living in London with a baby. She lives in North London with her husband, baby Pip and their cat Delilah.