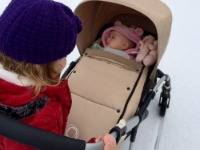 What's it like being a mum of two, and what are the differences between first and second children? TalkMum blogger Gillian from A Baby On Board is finally getting used to life as a mum of two...

So what's it really like being a mum of two? I found it impossible to get my head round the idea when I was pregnant. Juggling work, an energetic toddler and a house rennovation that took up all of my time, I had no idea where I was going to fit in a newborn too. 'You'll have your hands full!' everyone told me and I smiled with gritted teeth.

I think it helps that I went into it with very low expectations and no preconceptions about domestic bliss, because the reality of life with two children - while still being difficult and exhausting - is actually a lot better than I'd thought. Surprisingly. 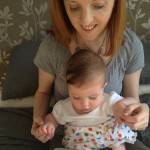 The comparisons between your first and second babies are vast though. Want to know what to expect? Here are ten of the not-so-secret signs you're a second-time mum.

First time: A five minute shower all to yourself was luxury.
Second time: The toddler showers with you while the baby sits in their bouncy chair in the bathroom. You don't care because everyone's happy and most importantly, you get a shower.

First time: Looking after a baby is so all-consuming that you have no time for anything, including getting dressed, showering, make-up, reading the magazine someone bought you two weeks ago and most definitely not housework
Second time: A day alone with just the baby feels like a spa break. And you can always find half a minute to put on make-up because a) you'd scare children without it and b) you're totally holding it all together, right?

First time: You recoil at the first sight of bodily fluids but like everyone else you're obsessed with them. Discussing the ongoing nappy situation is a hot topic at NCT gatherings.
Second time: All your clothes have a light frosting of sick. You ignore anything suspicious on your jeans so you can wear them one more time and not add to the never ending washing pile.

First time: You're neurotic, worry about everything and spend ages consulting Dr Google at 3am
Second time: You're relaxed and it is all so much easier. You know what you are doing. The baby days are lovely and so much more enjoyable.

First time: You swear your precious first born would never watch TV or eat any non-organic produce
Second time: They know the theme tunes to all the CBeebies programmes and you don't blink an eyelid when they help themselves to the biscuit tin after the baby arrives.

First time: You knew how many weeks old the baby was to the very minute, and got emotional on every monthly birthday.
Second time: You only have a vague idea due to the weekly Babycentre emails (but they can't be right, surely?)

First time: A weekly regular at Baby Clinic, you were first in line to ask the HV a long list of questions.
Second time: The red book gathers dust on the shelf and you're not even sure what day Baby Clinic is on. You'll make it next week...really

First time: The first child has neatly organised electronic folders of photos ordered by month and occasion.
Second time: The second child has one folder that always needs updating. Her sister is on most photos, usually wearing fancy dress.

First time: Everyone asks when you're having the next one. You react with open mouthed shock and indignation, despite knowing it's inevitable.
Second time: Some things never change; everyone asks if you're having another. You're too tired to care. But despite everything - the chaos and noise, you find yourself secretly wanting a third. Because the times it all goes right are so utterly blissful, you can't imagine not doing it all over again.

Does all this sound familiar? What were the main differences you found between your first and second children?