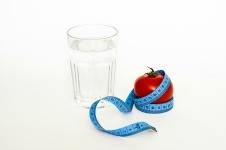 New TalkMum blogger Katrina from Cool Bananas has a thing or two to say about New Year Resolutions...

Are you suffering with a post Christmas hangover? Were you a little over friendly with the mulled wine and too chummy with those Quality Street chocolates? Perhaps you’re eagerly awaiting New Year's Eve celebrations as a form of ‘The hair of the dog’ to remedy this? One dead cert, which inevitably follows the season of excess, is the age-old tradition of making new year resolutions aka: the guilt confessions, setting yourself up for failure, yada yada.

I don’t like new year resolutions (can you tell?). Nay. I hate them. My problem with them? Well dear reader, answer me this if you will, how many of said 'resolutions' have you (1) ever actually followed through, past say February? and (2) How many of these ‘promises’ are repeat offenders, gracing the page year after year?

The problem is, when we set ourselves these goals, which are historically unattainable or unrealistic: impending failure is set to follow. We then create a vicious cycle, rendering good intentions like new years resolutions, doomed.

As humans we have a tendency to adhere to a ‘pack mentality’: and whilst there is nothing inherently wrong in such behaviour, it sends me running. Partly because I’m a rebel (I tend to walk in the opposite direction of a crowd) so jumping on a bandwagon goes against this. In my mind, they are futile unless backed by an overwhelming determination to improve your lifestyle choices, because you fundamentally want to rather than because it’s the ‘thing’ to do (as is often the case with a seasonal, yearly event like this).

I'm, by no means, a saint. My major vice in life is McDonalds chips, and I certainly over indulge from time to time. I don't get to work out nearly as much as I'd like, I'll never have washboard abs, and that's OK. I always strive to be a better me and mentally I list what I'd like to work on throughout the year. I’ll never use January the 1st as a delay tactic.

But, in saying all of the above, if you do want to join the communal pledge, then frankly, this is OK too. Please just enter into them with the philosophy that what you’re aiming to achieve isn’t just a quick fix: There will be a string of events, which you must endure to achieve your goal, the catalyst being a large serving of PMA - Positive Mental Attitude. If you’re really ready to change? Then you will move mountains to do so, regardless of starting on January the 1st, or December the 29th.

Aim high. Start small. You cannot run before you can walk. Take it one day at a time, and give it time: Rome wasn’t built in a day. You can do this! Surround yourself with those who will encourage & support you.

Read more from Katrina on her blog and read about the baby names set to be popular in 2015.