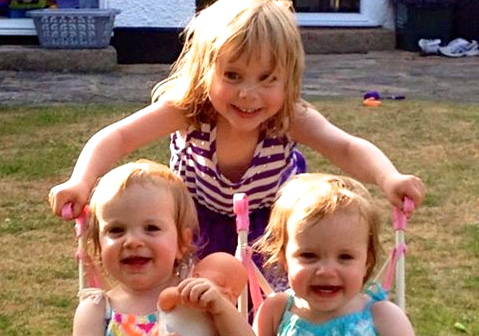 With my first baby I was induced at 42 weeks. It was 38 hours of full on active labour and then right at the last she turned back-to-back and became distressed. It was a ventouse delivery and – if I’m honest - all quite terrifying by the end.

After that experience, I was a bit apprehensive about giving birth to twins due to the increased chances of complications.

I really wanted to have them naturally, if it was safe to do so. I played down the traumas of the first birth in case I was automatically put on the C-section route. However, the consultant was very positive about trying for a natural birth, but did explain that it’s not uncommon for the first baby to be born naturally and then the second to have to be delivered by C-section because it doesn't get into position or starts getting distressed at all the extra space. I was also told that they wouldn’t let me go past 38 weeks, so would be induced at that point if I got to it. I wasn’t too keen on the idea of another induction as the first had been tough, but at least it would mean I’d gone to term (there is a high chance of premature labour with multiples).

I had a sweep at 37 weeks +1, and a further two that week and tried all the usual tricks to bring on labour naturally. I was absolutely ginormous and suffering from PUPPP (horrendous) and was literally itching for the onset of labour.

It wasn’t to be, and I went in at 38 weeks +1 for an induction. I’d already started with some mild contractions and had the first pessary at 7pm. I decided to go for a walk around. By 10.30pm my contractions became a lot stronger, so I headed back to the room. I had my waters broken at 1pm and then the contractions really went up a notch. It was time for some gas and air! I was delighted to hear I was already 8cm dilated. At the same point in the proceedings the previous time I was barely 2cm. Hurrah!

I’d been advised by consultants to have an epidural towards the end of the labour so that I was ready to go if the second baby needed to be delivered by C-section. I wasn’t too keen on having one, but felt it was the safest option. As it happened the anesthetist barely had time to do her stuff as 12 minutes after it was administered, Maria was born. I got to hold her for a little while – something I was fearful wouldn’t happen – and then she went to be checked over. I could still feel the contractions, but they were almost completely painless. Baby number two was thankfully in the right position so it was all systems go. Gabriella arrived 21 minutes later. It was about 100 times easier than first time around. Who’d have thought?

Maria weighed 5lbs 8½oz and Gabriella 5lb 12oz; they were healthy weights for twins and had no problems so I was able to hold both of them together. It was an amazing feeling and I knew how fortunate we’d been. I was even able to leave hospital the next day.

Have you had twins? What was your experience like? Tell us by commenting below.

Now read: Ante-natal care when you're pregnant with twins and What it's like to be induced.