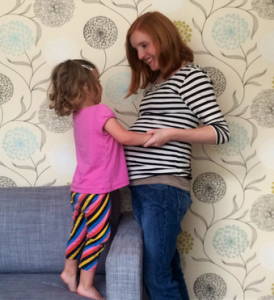 So the baby clothes are washed, the cot is out and the hospital bag is packed. But is our pregnancy blogger ready to have her baby? Over to Gill from A Baby on Board...

I've just hit 37 weeks, which means my pregnancy has reached full term and the baby could arrive at any point in the next few weeks.

Although I'm really excited to meet them, I would still like a bit more time (to catch up on sleep and TV if nothing else!)

However everything is now ready, from the hospital bag to the arrangements for my toddler when I go into labour.

Who knows when that will be though?

Last time I had a planned induction on my due date, but this time I won't be induced and so will - hopefully - go into labour spontaneously.

I had a bit of a false alarm this week though. I've been getting really strong Braxton Hicks (has anyone else had these?) While I do remember them from my first pregnancy, they are much stronger and more frequent this time. One morning this week they became really regular and I wasn't sure if they were leading up to contractions. I quickly messaged one of my friends, who reassured me that she had exactly the same during her second pregnancy and it wasn't labour. And sure enough, they soon stopped.

Not long to go until the real thing though! And hopefully, I'll know what it is when it happens.

Did you have any false alarms about labour when you were pregnant?