You're encouraged to write a birth plan during pregnancy, outlining everything you'd like to happen during labour - the type of delivery you would prefer, pain relief you do and don't want, and any additional requests. But what happens when your birth plan doesn't go to plan? Here's TalkMum blogger Chloe on what happened after her labour started during the football (with possibly the best description of waters breaking that we've ever read): 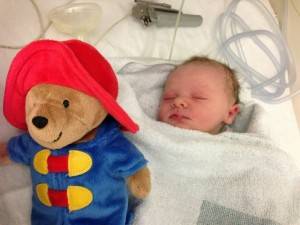 "Ooh," I said as I lay on the sofa like a beached whale. "Something just kind of ... pinged. This might be it!"

I was pretty excited. I looked at my husband James and could tell he wasn't quite so excited. It was Saturday night, Match of the Day had just started and there had been a bumper goal-fest that day.

I waddled to the bathroom to investigate further and discovered that this was indeed it. My waters had broken. That was good. They were also very yellow. Not so good.

I called the hospital and they said they were worried that the meconium in my waters meant the baby was in distress. They told us to go straight in because the baby would need careful monitoring.

We tried not to worry as we drove towards the hospital. We tried to look on the bright side.

"At least my waters aren't gushing," I said. "It's more of a slow trickle."
Then we went over a speed bump.

All of a sudden it was like someone was emptying a two litre bottle of warm lemonade into my jeans. The upholstery on the passenger seat hasn't been the same since.

We parked and I squelched up to the maternity unit, leaving a trail of gunk in my wake. I felt like a snail. There's nothing dignified about childbirth.

We were put in a room and I was strapped up to lots of machines. The baby seemed to be doing fine, which was a huge relief, but the need for constant monitoring put pay to any plans I had to remain mobile or have a water birth.

It was around midnight by now and the contractions were starting to get painful. Gas and air was a godsend. So was James. Once we'd worked out that each contraction lasted 45 seconds, he held my hand tightly every time one started and counted down from 45. The counting gave me something to focus on, knowing that the pain would be over by the time we reached the count of one.

As the sun started to rise, the pain grew. I writhed on the bed and screamed for an epidural. The wait for the anaesthetist, who was busy in surgery, was agonising. But once she arrived and administered the happy juice, I was overjoyed. Not able to feel a thing below the waist, I chatted happily to the midwives I'd previously been hissing and howling at and I did some granny dancing with my hands to cheesy tunes on Magic FM. Those hours were unexpectedly relaxing.

By midday it was time to push. So I pushed. And pushed. And pushed some more. Nothing happened. More pushing. By this point a whole team of midwives and doctors were cheering me on and I felt like Crystal Palace in the playoffs. But still no sign of the baby.

I'd given it everything, but things weren't progressing as they should and it was getting a bit scary, so out came the knife. It's certainly not what any woman in labour wants to see, but at that point I just wanted my baby delivered safely. At least the episiotomy was quick. One big, unceremonious gush later and the doctor held a little bloody bundle aloft, just like that scene in The Lion King.

'Hello, Samuel," we both said, grinning.

He was worth missing Match of the Day for.

Chloe is a copywriter who lives in South London with her six-month-old son Samuel, her husband, and their long-suffering cat. She blogs about life as a London mum and never having enough time to knit at knittenden.blogspot.com