The secret tricks to dealing with a fussy eater toddler 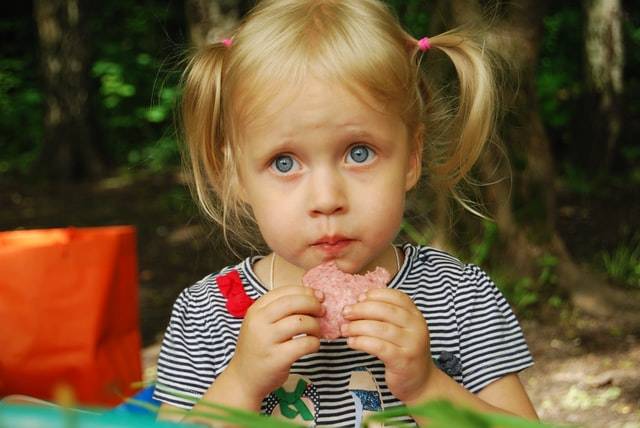 TalkMum blogger Rachel from Make A Long Story Short shares her top tips on convincing your toddler to eat their dinner...

Imagine our surprise, then, when our two boys turned out to be not so much fish-and-chips off the old block. My three-and-a-half-year-old will eat most things in our repertoire now, provided the cutlery’s the right colour. But he was a determined little food-striker for a long, long time, and I spent hours bashing my head against the wall in frustration. My youngest is still in head-bashing stage, and it feels endless.

There’s a lot to be said for presenting them with good meals and letting them choose to eat it, or not. But my babies have been small, and I was afraid to let them go too long without eating anything at all. So I present to you my arsenal of mealtime strategies for winning over your picky toddler. Because they’ve learned to say ‘no’, haven’t they? And you kind of wish they hadn’t.

1. Pick Your Moment; Prepare The Ground

For my toddler, eating is a matter of temperament. Sometimes he feels like it; sometimes he doesn’t. Most of all, he needs to be pre-warned. So I start explaining that it’s time to eat about twenty minutes before he ends up in the high chair. And then I explain that I’m making his sandwich. And then I explain that he can have a yoghurt afterwards if he eats the sandwich. It means I’m rabbiting on through most of lunch, but it manages his expectations, whether or not he’s practising selective hearing at the time.

Life is not normally neat and organised for us. But the rub is this: he definitely eats better when we’re at home and when we can take as long as we like over meals. Often I’ll put something down on the tray with him screeching indignation, and then fifteen minutes later, if I leave him to his own devices and don’t look bothered either way, he’ll start eating it. So whenever it’s possible, I think continental: long, lazy meals in a relaxed atmosphere. Cheese is essential.

3. Serve In Courses, With The Good Stuff First

I took this transformative idea from Pamela Druckerman‘s French Children Don’t Throw Food. When is he hungriest? Right at the beginning. When is he most likely to eat the fruit and veg you need him to eat and he, apparently, needs to throw against the wall? Right at the beginning. I serve all his meals like this: I bring him vegetables right at the start (a mug of peas, a few red peppers, some oranges or grapes), and leave him there picking at them for ten minutes while I make the rest. If he eats nothing else, at least he’s had the good stuff. If he doesn’t eat even that, at least you tried.

4. Force The First Taste, Then Back Off

I’ve lost count of the number of times he’s screamed to high heaven when I’ve come at him with a spoon, only to change his mind once he tasted it. Most days I have to pin him down to get the spoon near him. Then I leave him to decide whether he likes it. The house rule is still that he has to try everything once.

Sometimes I think he’s throwing a fit over the food, when actually he just wants to use the spoon himself. This involves a certain amount of sacrifice on the part of his outfit and the nearby wall. If it means he eats more, I don’t mind. I can’t speak for the wall.

…keep on pushing it. Apparently a child needs to eat a food twelve times before they genuinely dislike it. I don’t force it into his mouth if he seems completely disgusted, but I do serve it again the next week. I’d like to say I’ve had some success stories with this method: the truth is that his dislikes are so random I can’t keep track of them. I live in hope, though. There was one time he ate raw tomato.

Now he’s past his immediate babyhood, I don’t believe in refusing him cake, chocolate or other desserts, or the occasional fast-food outing, or nice drink. If we’re eating it, it’s not really fair to say he can’t have it because it’s unhealthy. And I think that children who are never allowed treats at home tend to gorge until they’re sick in other places. But make them treats, not staple foods (ARE YOU LISTENING, SELF).

8. Snack Not, Lest Ye Be Disappointed

I have learned this the hard way: his appetite is tiny. I used to hand out raisins and toddler snacks in between meals, and found that he stopped eating meals. So it’s easier not to snack at all, much to this inveterate snacker’s disappointment. If he’s going to fill up on raisins, you might as well not cook.

I hope that one of the things we can bequeath to our boys eventually is an enthusiasm for food. Until that appears, I try to look and sound majorly excited about everything I serve. Sometimes, just asking our littlest for some and letting him feed you is enough to convince him that it’s worth trying. Sometimes. And other times, you just feel like an idiot, cheering for celery. But here’s the thing…

Can we be very serious for a moment? It’s ok. It’s really ok. You’re not a bad parent. From what I’ve read (and trust me, I’ve googled it more than once) very few children voluntarily starve. If you’re genuinely worried about his energy levels or bowel movements, see your doctor or health visitor. But I have never (ha!) in my life (haha!) worried about my boys’ energy levels (oh, stop!). As long as they’re drinking plenty and eating some, I try not to worry. You shouldn’t either. Because one day you’ll be out at a restaurant and realise there are two or three choices on the menu he’ll definitely eat, and you’ll never have to cheer for celery again. It’ll come, I promise. It’ll come.

Do you have any tips for parents of fussy eaters? Share below in the comments.