In celebration of midwives: The RCM Awards 2017 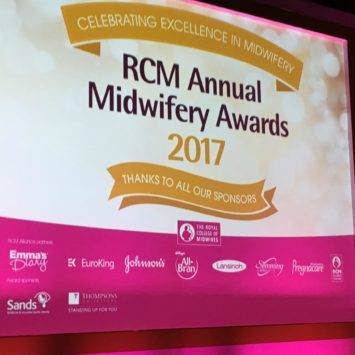 Midwives have a hugely important role to play at a pivotal point in the lives of new and expectant parents. If you’ve had a baby it’s likely that you’ll never forget your midwife.

This week midwives across the country were celebrated at the Royal College of Midwives Annual Midwifery Awards at a ceremony hosted by journalist and broadcaster Natasha Kaplinsky. Janet Ashton, a Maternity Support (MSW) at Dartford and Gravesham NHS Trust won the Pregnacare Maternity Support Worker of the Year Award. She was nominated by her colleague for her initiative in setting up classes for women and their partners to support them with breastfeeding and caring for their new baby.

The classes started by Janet were to meet the needs of new parents supporting them to learn basic skills in caring for their babies. The focus was on parents in areas of high deprivation and the classes are in a community Children’s Centre that parents in the community can easily attend.

A range of topics are covered in the classes including breast and bottle feeding, nappy changing, bathing and cord care. Feedback from parents has been very positive and the class is now being expanded to the wider community.

The award judges praised Janet’s work saying, ‘She is the gold standard other health care workers want to aspire to. She demonstrated a wealth of knowledge and experience to develop this existing initiative in Bexley. Evaluation of her work has been rigorous. Breastfeeding rates and parent engagement has increased. Empowering hard to reach women, boosting their confidence and self esteem.’

Congratulations to Janet, all the winners at the RCM Awards 2017 as well as midwives up and down the country for the amazing work they do.