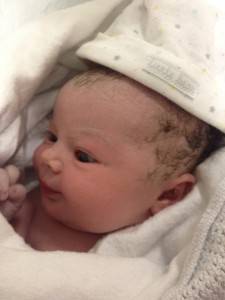 July on TalkMum is birth month, and we've been taking a look at the different types of labours of our bloggers. Here's Eleanor, on how an emergency c-section turned out to be the safest option for her and her baby - and how this unexpected outcome doesn't mean you should panic:

A week after my due date, I went to the bathroom in the morning, had a wee, got up, and felt a colossal gush hit the bathroom floor. I actually laughed in delight, things were starting, our baby was on her way! The hospital said not to rush, they’ll be sending me home again probably, so I didn’t panic.

An hour later after several comical attempts to make a coffee as syrupy water continued to go south, I went to change my pants and found a very sticky, treacle-like substance all over them and me. Meconium, the hospital confirmed. Come now.

Still feeling excited, forgetting to eat (do not make this mistake), we arrived and were quickly shown to a delivery suite. No pool for us. Meconium means 24hrs to get the baby out before damage can occur. The vaginal examination was sharp and painful. No dilation, no engagement. No chance the baby was ready. The induction drip was started, the cannulas niggling and jangling in my hand.

It got painful very quickly. ‘No smiles anymore?’ said the midwife. No smiles. The pain of a contraction is hard to describe. It felt like a large heavy weight was being rolled around the inside of my pelvis. In ever-increasing, outward circles. I think I cried a bit. Then I wised up and stuck the TENS machine on. Magic TENS machine.

Four hours later, I was examined. 1cm. Sod this, I thought, and asked for Gas and Air. Magic Gas and Air. I breathed and sucked and said what my sister said everyone says ‘wow, it’s like being stoned’. It passed so quickly, it felt like a battle and I thought I was winning, every contraction doing something. Eight contractions in ten minutes came as they turned up the drip. My husband sat still, telling me good things and fending off the midwives chat.

Four hours later again, midwife shift changed as the sun went down. Husband sensed trouble as my lack of progress was discussed. 2cm now. I was furious, frightened and couldn’t see a way out. 2cm in 9 hours? How could I give birth within 24? I shouted. They brought Pethadine. Magic Pethadine. Great choice for panickers.

Once it had kicked in and the epidural I’d been so sure I’d never need was on its way, the midwife mentioned we might have to start looking at other birth options. She meant a c-section. I sort of ignored her the first time. But after the epidural went in smoothly and my contractions became nothing more than a blip on the monitor each time they happened, she examined me again. 4cm after 19 hours. The baby’s heartbeat is too erratic, they said. We’re going to book you in as an emergency c-section. It felt right. We weren’t frightened. I was tired and ravenous, but not allowed to eat.

In between the three top-ups of the epidural to keep me prepared for the operation, they turned off the contraction drip. Our baby withdrew the short distance she had travelled, and went back to sleep with a resting heartbeat. She was safe. We dropped down the emergency list as women in greater need appeared.

Suddenly it was time to go, shift change for the surgeons, we were first job of the day for the elective c-section crew. Into the theatre, bright lights and Heart FM. More cannulas and more painkillers. Husband looking fetching in blue beside me. “I’ll feel it!” I cried to the surgeon. They were great. Just calm and efficiency and kindness. “You’ll feel me tickling you under your breasts in a minute,” she said. “This will be me bringing your baby out.”

I looked at my husband and we held on tight. “Here she is! It’s a girl! Would you like to see her now?”

When they dropped the curtain separating me from our girl, I saw her. Bloody and pink, wiggling and crying. I will never, ever forget that moment. As they wrapped her and put her in my husband’s arms, She’s The One by Robbie played on the radio and I just stared.

Very quickly, one surgeon stitched and the other cleaned. I was sent to triage with a baby beside me. She had her first go at eating whilst we watched wondrously and then I demolished the entire contents of my tuck box with a hunger I cannot begin to describe!

A c-section was the only way of birthing that I hadn’t considered or planned for. The long first stage of labour was debilitating and at times demoralizing, but I felt supported and listened to. I got the best care possible and good advice, despite what various organisations had told me would occur if I took drugs or had surgery.

If you’re expecting a baby, when it comes to birth, you’ll get told birth stories, not given advice, and I think that’s a good thing. You can plan for labour and birth but you can’t plan for how your body will decide to take things. Don’t be scared of an emergency c-section, read about the risks and benefits and listen to tales like mine. Emergency doesn’t necessarily mean danger or panic.

Did you have an emergency c-section? What are your tips for a quick recovery?